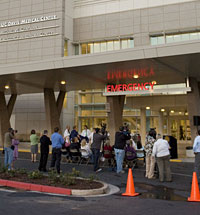 For the second time in five years, the union representing thousands of University of California hospital workers is poised to strike.

American Federation of State, County and Municipal Employees Local 3299 said this morning that 97 percent of its members have voted to authorize a walkout. The union’s announcement didn’t detail how many members voted.

The local represents some 13,000 custodians, gardeners, cooks, patient care assistants, vocational nurses and radiology technicians at the five hospitals in the university system, including the UC Davis Medical Center in Sacramento. Those employees have been without a contract since October.

AFSCME has complained that the university routinely understaffs hospitals and wants to cut employee compensation while it spends more on pay and benefits for administrators. The university has brushed aside those barbs as union posturing during deadlocked contract negotiations.

During talks for its last contract in 2008, the union mounted a five-day strike despite a restraining order by a judge who found that the labor action would endanger public safety.