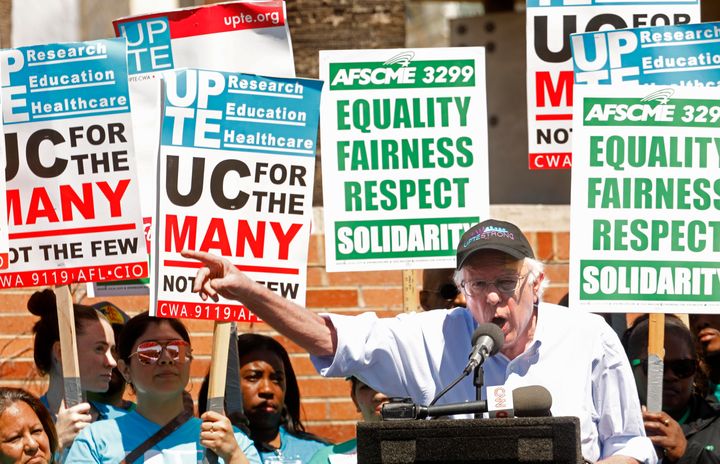 AFSCME 3299 has a labor dispute with the school, and Democrats don’t want to be on the wrong side of unions.

The Democratic National Committee says it will no longer hold the sixth presidential debate at the University of California, Los Angeles, choosing to side with a union that has imposed a boycott on the school over a labor dispute.

“In response to concerns raised by the local organized labor community in Los Angeles, we have asked our media partners to seek an alternative site for the December debate,” DNC senior adviser Mary Beth Cahill said Wednesday.

AFSCME 3299, an affiliate of the American Federation of State, County and Municipal Employees, sent a letter to at least six of the candidates on Tuesday, asking them to respect its boycott on speakers appearing at UC schools until the dispute is resolved.

In other words, AFSCME 3299 told the candidates that if they support workers’ rights, they need to skip the UCLA debate.

“What we’re doing is asking for the candidates who are coming to UCLA’s campus to honor the three-year boycott that we’ve had in place for any speaker attending any event on any of the university’s campuses to stand in solidarity with the workers and essentially to not lend their name and credibility to the university that’s treating workers like this,” said Liz Perlman, the union’s executive director.

The December debate will be sponsored by “PBS NewsHour” and Politico.

“This morning, the Democratic National Committee asked our media partners to move the December 19, 2019 debate to another venue following renewed and unanticipated objections from organized labor,” UCLA said in a statement Wednesday. “With regret, we have agreed to step aside as the site of the debate rather than become a potential distraction during this vitally important time in our country’s history.”

It was surprising that UCLA was chosen as the venue for the debate in the first place. Democratic campaigns are generally careful to stay in unionized hotels and use unionized venues for events, since labor is an important constituency of the party. (Although, as HuffPost has reported, some campaigns are better about it than others.)

The dispute in California centers on UC’s outsourcing of jobs to lower-paid workers. AFSCME 3299 represents 26,000 service and patient care workers in the UC system ― 91 percent are women of color ― and they are some of the lowest-paid employees there.

From AFSCME 3299 President Kathryn Lybarger’s letter to the presidential campaigns:

Despite UC’s illegal practices to scare AFSCME members and weaken us ― including allowing violence against members and union staff at picket lines and campaigning to get members to quit the union ― we are resilient and continue to stand strong. We have gone on strike five times in the past two years over UC’s unfair labor practices and contract demands, and we are ready to do whatever it takes to hold UC accountable to the law and to secure a better future for ourselves and our families. …

Please join us and endorse this boycott until the University of California commits to addressing our priorities and bargains in good faith with AFSCME 3299.

In a filing with state regulators, AFSCME 3299 alleged that UC is breaking state law by secretly contracting out work, estimating that the school system increased spending on outsourcing of service and patient care jobs by as much as 52 percent in the past three years.