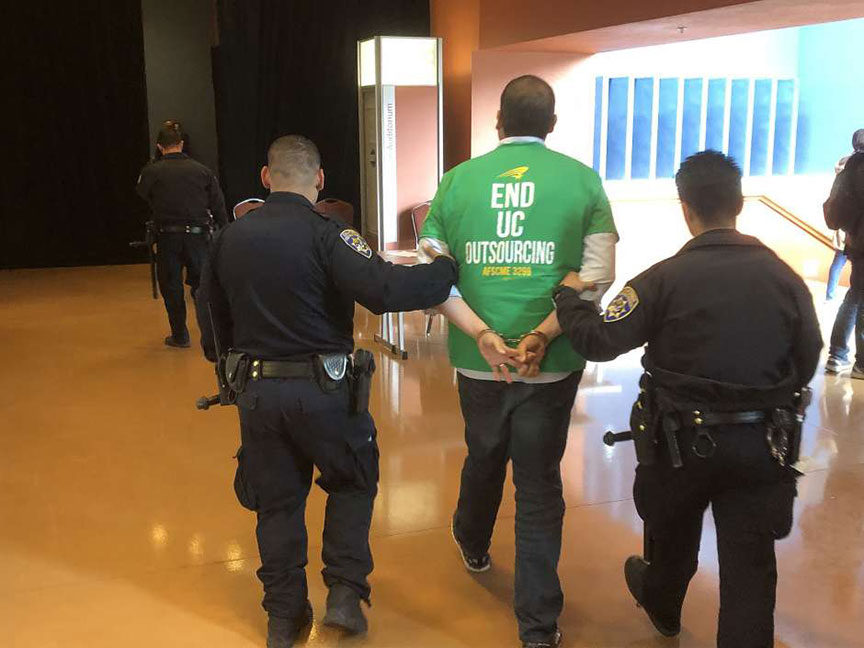 (OAKLAND, CA) – As rare May showers drenched the state on Thursday, striking University of California workers put on a show of determination as they protested illegal outsourcing of middle-class jobs on campuses and medical centers across the state. In San Francisco, UC President Janet Napolitano’s fellow former Obama appointee, Julián Castro, joined the picket line to support UC workers at Mission Bay Medical Center—just shortly after 12 individuals were arrested for an act of civil disobedience during UC’s Board of Regents meeting, where they took issue with the University’s unfair labor practices. Three charges were filed against the University earlier this month.

“These latest charges highlight the scope of what is an increasingly radical privatization scheme at UC, which is ultimately focused on one thing—paying its lowest wage workers even less,” stated AFSCME Local 3299 President Kathryn Lybarger to UC Regents. “But let me be clear, this is about something much more fundamental than wages or benefits—this is about protecting middle-class jobs in California.”

Likewise, Veronica Jones, an Operating Room Technician that also participated at Thursday’s Regents meeting, spoke to concerns over outsourcing specifically at medical centers. “In my department, on an average day, half of the six to seven OR Techs on our shift are outsourced…these workers aren’t familiar with the hospital, which produces consistent problems with preventable patient infections,” shared Jones with UC Regents. “It’s not their fault. UCSF has been so determined to pay its workers less, it’s willing to accept these entirely preventable risks to patients.”

The University’s unlawful refusal to talk with its own employees about its covert plans to outsource work follows a string of scandal around the practice of outsourcing at UC. In 2015, Federal authorities began investigating widespread abuse of outsourced workers at UC Berkeley, including allegations of wage theft. Since then, a California State Audit report, UC’s own internal audits, and analyses of UC’s own employment data have shown that these efforts are displacing University employees, marginalizing women and people of color, enabling repeated violations of California’s most basic labor standards, and worsening income inequality at the state’s third largest employer.

“It’s a little bit ironic that we’re here today in the shadow of this newest investment of the University of California system, this beautiful Mission Bay investment that costs hundreds of millions of dollars,” said 2020 Presidential hopeful Julián Castro to a rallying crowd of striking workers after the Board of Regents meeting in San Francisco. “If [the University of California] can put hundreds of millions of dollars into this, then they can put a little bit more money into the staff, into ensuring that we don’t outsource, but invest.”

While UC is yet to acknowledge the impacts of outsourcing, Castro believes the issue is related to another California crisis—housing.

“The wages that so many Americans are earning will not support them being able to afford the rent—why does that happen?” asked Castro during the rally. “It happens because little by little, corporations and institutions like [the University of California] have been outsourcing. They’ve been privatizing. They’ve been shifting people to more jobs that don’t provide good wages, salaries, benefits, and don’t provide security and retirement. That’s what has been happening for the last four decades in the United States of America, and we have to change it in the years to come.”