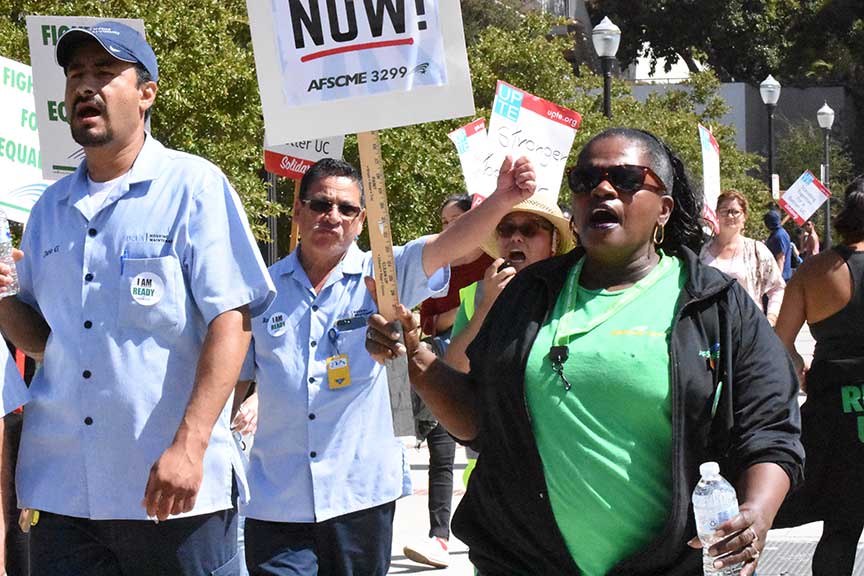 (OAKLAND, CA) – With labor negotiations at the University of California deadlocked and UC moving to bypass collective bargaining by unilaterally imposing employment terms on its frontline employees, UC’s Patient Care Technical workers voted to authorize a strike this week with 96% support. The vote comes just a few months after UC’s Service workers staged a 3-day walkout in May over growing income, racial, and gender disparities within the University’s workforce—which prompted 53,000 University workers to join the strike in solidarity.

“For over a year, we’ve raised concerns over the University’s growing efforts to outsource jobs to contracting companies that pay workers less with little to no benefits,” stated Monica De Leon, Vice President of AFSCME Local 3299’s Patient Care Technical Unit. “We believe it’s major driver of inequality here at UC and instead of working with us to address the problem, University administrators are forcing proposals on workers that will only make things worse.”

Earlier this month, University officials announced imposed employment terms for more than 15,000 of UC’s Patient Care Technical workers. The terms will raise healthcare premiums by as much as 61%, lift the retirement age by 5 years, flatten employee wages for the next several years, and allow for more outsourcing of thousands of patient care jobs.

“UC is trying to force workers to get by with much less than what’s necessary to provide for our families while lining the pockets of its top brass with excessive salaries, lavish perks, and secret slush funds,” added AFSCME Local 3299 President Kathryn Lybarger. “By shortchanging workers, UC is also shortchanging the students, patients, and communities who depend on us. The University is demanding less security and more inequality for tens of thousands of its workers, and that is completely at odds with its promise to ‘pioneer a better future’ for California.”

The move to force employment terms by UC also follows the issuing of formal complaints by the Public Employment Relations Board last month that allege illegal interference with workers’ ability to organize a union.

While Patient Care Technical workers voted to authorize an economic strike this past week, Service workers voted to join them in solidarity. If workers ultimately opt to strike, the union will issue UC a 10-day notice.