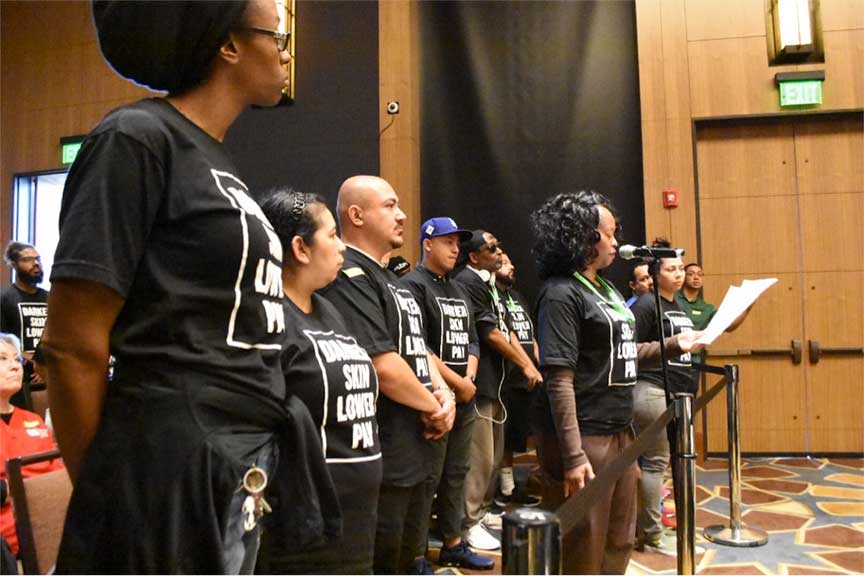 (OAKLAND, CA) – Stalled labor negotiations between the University of California and its largest employee union, AFSCME Local 3299, reached a boiling point at Wednesday’s UC Board of Regents meeting when union leaders publicly announced that their members will be voting on whether to go on strike for the second time this year.

The forthcoming vote follows a 3-day walkout by 53,000 UC workers last May over the University’s outsourcing practices, which research shows is driving growing income, gender, and racial inequality within California’s 3rd largest employer.

“UC’s employment data shows that women are getting paid far less to start than men and that Black workers are vanishing,” said AFSCME Local 3299 President Kathryn Lybarger. “It’s because the University has stopped investing in career ladders and outsourced good middle-class jobs to low-wage contract companies that pay workers dirt.”

At issue for UC workers is the University’s practice of outsourcing career positions to independent contracting companies that pay workers less. In fact, data shows that the staffing ratio at UC San Francisco has been as high as 1 contractor to every 6 directly employed workers. UC workers say that the practice has the effect of taking jobs that once paid living wages with full benefits and turning them into low-wage contractor positions with few benefits and a higher risk of abuse. In the past, UC contract companies have been found to arbitrarily slash worker pay and pay full-time workers under multiple names in order to skirt overtime rules.

Research also shows that AFSCME Local 3299 represents the most diverse workforce segments at UC—resembling the demographic makeup of California as a whole more than any other workforce segment at the University. As such, workers argue that outsourcing has the effect of destroying career pathways for people of color and trapping them into low-wage positions. In fact, UC Davis Medical Center has gone so far as to deny outsourced contract workers career Patient Care Technical Unit positions when they apply, despite the fact that the “temporary” terms of their contracts have been extended multiple years, in some cases.

“Outsourcing is pioneering a future of more inequality,” said Rosalyn Williams, an MRI Technologist at UCLA’s Ronald Reagan Medical Center who spoke during public comment on Wednesday. “We will not allow UC to normalize a reality where darker skin means lower pay.”