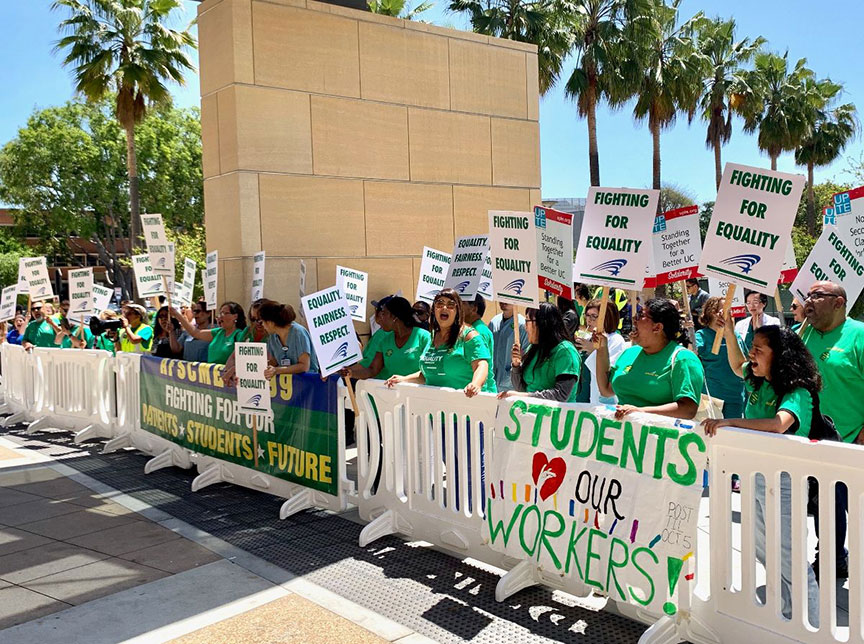 “For more than three years, workers have been sounding alarms about UC’s efforts to outsource living wage jobs to poverty wage contractors,” said AFSCME 3299 President Kathryn Lybarger. “These latest charges highlight the scope of the University’s increasingly radical privatization scheme, which is ultimately focused on one thing—paying its lowest wage workers even less.”

These latest ULPs allege that the University of California has illegally begun to seek and/or enter into agreements with private contract companies to outsource University work (links to complaints here, here, and here)—with the University bypassing workers and their union at every turn, refusing negotiations as required by California law.

In December, UC Davis stated that it was refusing to bargain over the outsourcing of its entire adult rehabilitation hospital to a private equity-owned healthcare firm (click here for a white paper on the issue) whose median compensation package was just $22,000 per year in 2017. At the same time, UC entered into a systemwide contract with AYA Healthcare to allow its affiliates access to $150 million in outsourced labor annually. Most recently, UC put out a “Request for Proposal” in February of this year, inviting vendors to submit proposals to provide a contract labor force for UC, the CSU system, and California’s Community Colleges.

The latest charges follow a string of recent scandals involving outsourcing at UC and concerns that the practice is deepening the problem of income inequality at California’s third largest employer.

In 2015, Federal authorities began investigating widespread abuse of outsourced workers at UC Berkeley, including allegations of wage theft. Since then, a California State Audit report, UC’s own internal audits, and analyses of UC’s employment data have shown that these efforts are displacing University employees, marginalizing women and people of color, and enabling repeated violations of UC’s most basic labor standards.

“This is not just about UC’s serial lawbreaking, but its efforts to eliminate the last remaining middle-class careers in California,” Lybarger added. “Neither our patients, students, families or communities are being well served by a publicly financed race to the bottom.”

The union bringing charges, AFSCME Local 3299, has already launched a systemwide speakers boycott in protest of the University’s failure to address employee concerns over outsourcing. Additionally, the union’s Unfair Labor Practice committee has convened to consider further action on the latest charges, which could include an Unfair Labor Practice strike.