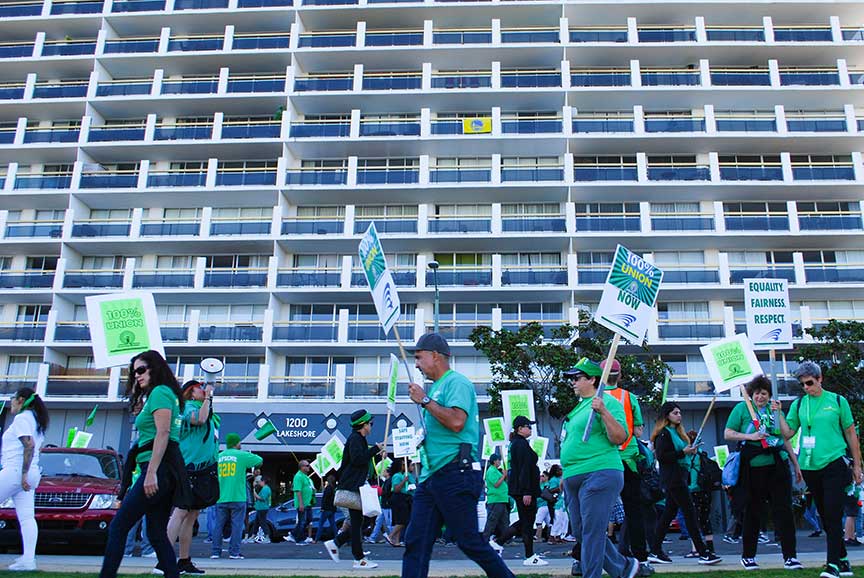 (OAKLAND, CA) – The Public Employees Relations Board (PERB) has issued formal complaints against the University of California (UC) in accordance with unfair practice charges filed by the University’s largest employee union, AFSCME Local 3299. The University is charged with being in violation of state law that protects workers’ access to their union, free of undue interference from their employer.

“By depriving unions the ability to communicate with represented workers, and surreptitiously trying to interfere with employees’ decisions to join or support unions, the University of California has effectively aligned itself with the Trump Administration and dark money groups who are financing a frontal assault on the rights of public sector workers,” said AFSCME Local 3299 President Kathryn Lybarger. “We’re outraged—but not surprised—that UC would choose to make common cause with the shadowy corporate interests that are trying to silence American workers, slash their wages, and outsource their jobs.

UC’s latest violations of worker rights come as unions across the nation are coping with the impact of the U.S. Supreme Court’s Janus decision, whose anti-union ruling was sealed with President Trump’s appointment of Justice Neil M. Gorsuch. The decision is thought to be part of a coordinated national effort over the last 40 years to further weaken the collective bargaining power of public sector workers. Backers of the effort include the American Legislative Exchange Council (ALEC) and the State Policy Network—which are organizations affiliated with the Koch brothers, the Sarah Scaife Foundation, the Mercer Family Foundation, and the Walton Foundation.

“Openly violating workers’ rights as wealthy special interests coordinate with the Trump Administration to mount continued attacks on labor unions only makes UC complicit in an historic distortion of justice,” Lybarger added. “UC’s actions have breached our trust and we will take necessary actions to preserve the collective voice of UC workers.”

Now in its 70th year representing UC workers, AFSCME has a storied history at the University of California. The union led efforts to end racial and gender discrimination in the University’s hiring, successfully bargained for the University’s first employee benefits package and minimum wage, and has helped lead efforts to reign in the financial excesses of UC’s highest paid executives.

Earlier this spring, AFSCME represented Service employees mounted a systemwide strike to protest growing patterns of outsourcing and wage inequality affecting its lowest wage workers, who are disproportionately women and people of color. Tens of thousands of nurses, patient care, and technical workers ultimately joined the 3-day walkout. The University responded by bypassing collective bargaining altogether and imposing contract terms on the workers.

“The UC system was founded on the progressive principles and ideals of social justice, which AFCME Local 3299 has worked to uphold for decades,” commented Lybarger. “But UC’s treatment of its lowest paid workers illustrates that they’re no longer committed to practicing what they preach. If California voters didn’t support Trump’s union-busting agenda, then their public institutions shouldn’t either.”

PERB will hold an administrative hearing on AFSCME’s charges in the coming months, with a decision on the matter expected to follow shortly after.