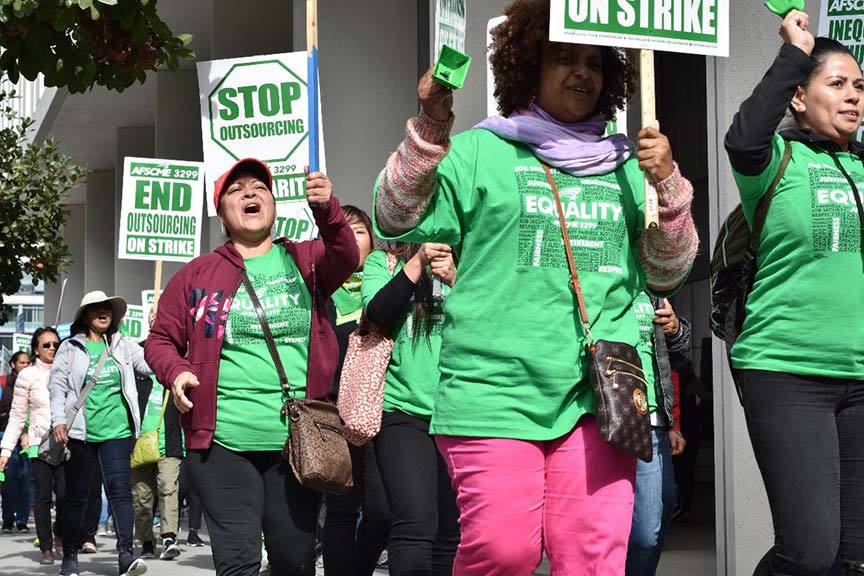 (OAKLAND, CA) – As the union representing 14,000 Professional and Technical employees, UPTE-CWA 9119, issued notice to the University of California of their intention to strike on March 20th, AFSCME Local 3299 announced that UC’s Service and Patient Care Technical workers would be joining them. Together, the 2 labor unions represent roughly 39,000 workers across the UC system.

Like AFSCME Local 3299 represented UC employees, those represented by UPTE-CWA 9119 have been working to negotiate new contracts since 2017.

“For nearly 2 years, UC has refused to recognize the value of its workers and has instead worked to worsen income inequality,” says AFSCME Local 3299 President Kathryn Lybarger. “Thousands of UC workers represented by UPTE-CWA recognize that the University’s efforts to flatten wages, cut benefits, and eliminate middle-class career pathways are hurting families, and our members are proud to strike with them in solidarity.”

UC’s labor problems have escalated since 2017, when the California State Auditor reported that UC’s Office of the President was paying excessive salaries to administrators, amassing a $175 million secret slush fund, and engaging in systematic efforts to replace its career employees with private outsourcing companies that pay their workers less.

“The frontline Research and Technical workers represented by UPTE-CWA are a vital part of the team of dedicated professionals that run UC every day,” added Lybarger. “By shortchanging these employees, the University is eroding the quality of services that students and patients rely on and undermining the very principles of economic mobility that UC routinely professes in public.”

Last May and October, AFSCME-represented Service and Patient Care Technical workers conducted the 2 largest strikes in the University’s history.