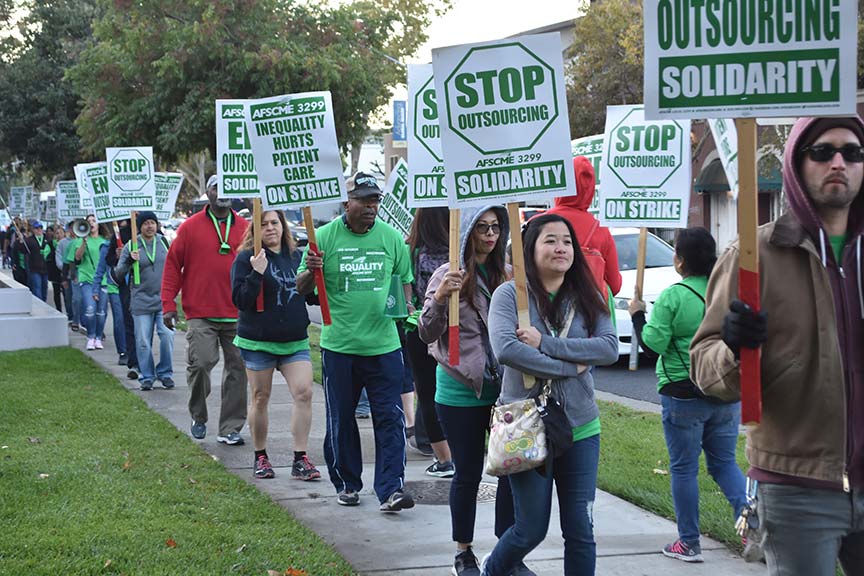 (SACRAMENTO, CA) – While the University of California is set to announce new developments on its $60 million Aggie Square project at a press conference later today, nearly 60 of its career hospital employees are voicing concerns over UC’s intention to outsource its entire inpatient rehabilitation department to Kindred Healthcare—the company tasked with operating a brand new 40-bed rehabilitation center as part of the project.

“Once the Kindred facility is built, the rehab program at the main hospital will close,” wrote Carol Studer, a UC Davis Health employee whose job is now threatened by the project. “Experienced staff who want to continue to work in this specialty—some who have been there 20 years but are not ready to retire—will have to walk away from their UCD jobs with benefits and reapply to work for Kindred.”

Kindred has not confirmed or released any plans to hire UC employees. However, pay rates at other Kindred facilities around California indicate that affected UC employees who reapply for Kindred positions could face steep cuts to pay and benefits. Some Kindred employees make as little as half of what UC Davis Health employee currently earn.

Likewise, UC has offered no concrete plans about what options affected employees might have if they’re not willing to take a pay cut and forfeit years of service towards retirement.

“Outsourcing is a cancer at the University of California, and it’s growing,” says Jasmine Tobin, an Occupational Rehabilitation Assistant at UC Davis Health whose job is also threatened. “This isn’t just about professional healthcare providers at UC Davis—it’s happening all over the state.”

Indeed, a 2017 investigation by the California State Auditor found that UC was failing to justify its displacement of employees in favor of private contractors, and has allowed these outsourcing companies to underpay their workers.

In 2015, federal authorities investigated a UC Berkeley custodial contractor for paying workers under multiple names to skirt overtime rules. A 2017 investigation by The Mercury News revealed that UC had failed to police its private contractors—allowing companies to get away with egregious labor abuses such as wage theft.

“As the state’s 3rd largest employer, the publicly-funded University of California has an important role to play in preserving what’s left of California’s middle-class,” said AFSCME Local 3299 President Kathryn Lybarger. “By outsourcing public service jobs to private firms that pay less, the University is actively undermining this objective, and hurting the very communities it claims to serve.” As for UC Davis Health employees and the Aggie Square project, AFSCME Local 3299 has called on UC to allow its inpatient rehabilitation department workers to keep their jobs and operate the new 40-bed Kindred facility as employees of UC Davis Health.