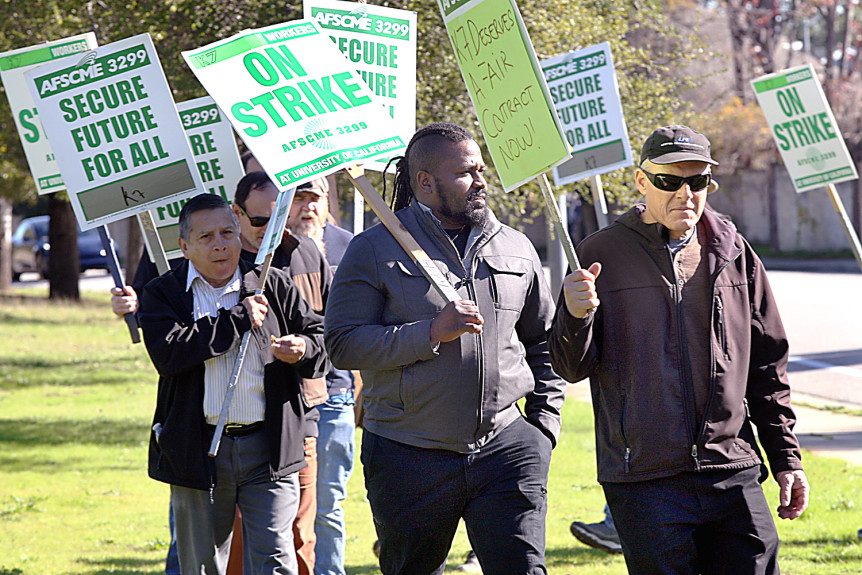 SANTA CRUZ — Dozens of trades workers are on strike at UC Santa Cruz as lengthy contract negotiations continue to stall.

The workers — including carpenters, plumbers and electricians — are represented by AFSCME 3299, which represents more than 24,000 workers across the University of California. But the Santa Cruz trades workers negotiate their contract separately as a 49-member bargaining unit.

Negotiations between UCSC and the unit have dragged on since late in 2017. Claiming they are paid below-market rates and are understaffed on a growing campus, the UCSC workers announced an indefinite strike Monday. It was not immediately clear to what extent the strike could impact campus services.

“We just need the resources to live in this community,” said Joe Baxter, an electrician and union negotiator, saying that he has not had a raise in the past three years — including the two years since the unit’s contract expired.

Baxter declined to detail specific figures about the unit’s proposed contract terms. Union representatives shared charts purporting to show that some of the UCSC workers make up to 36% less than the prevailing wage in their industry, or up to 32% less than comparable workers at UC Berkeley.

Responding to the strike Monday, UCSC officials said the administration is offering the workers a 23% raise over the next four years along with a $2,500 ratification bonus, caps on health-care cost increases and double-time pay for work beyond 12 hours per day.

“The campus has been actively bargaining in good faith for over two and a half years to obtain a successor contract, and we look forward to resuming negotiations,” UCSC spokesman Scott Hernandez-Jason said in a statement.

But it’s not just wages that are driving the trades workers to strike, according to Baxter and other union reps. It’s also dwindling staffing levels, and what some of the workers see as the UC’s push to “outsource” their jobs to non-union workers.

According to data shared by the union, 13 more trades workers would need to be hired to maintain the same worker-to-student ratio from 2008.

“We’re so understaffed right now that we can’t even do preventive maintenance,” Baxter said. “We’re just putting fires out, and it puts us in more dangerous situations because we’re understaffed.”

The strike is the latest in a series of recent labor actions at the Santa Cruz campus and across the University of California.

A grading strike among an unclear number of UCSC graduate students remained ongoing Monday on the first day of the winter quarter.

In 2019, the AFSCME 3299 and a separate union technical workers held multiple daylong strikes across the UC system that included rallies of hundreds of workers and supporters at UCSC.

AFSCME 3299 spokesman John De los Angeles called the latest UCSC strike a “microcosm of what’s going on at a larger scale” across the University of California.

“Right now there’s a lot of folks in Santa Cruz, a lot of workers — especially here at UCSC — who have been speaking out and saying that they are not being paid what they are worth,” Cummings said in an interview from the picket line.

He added that university administrators should do more to hear and address their employees’ concerns, particularly around the region’s high cost of living.

“They’re all trying to send a message to the university, to say that it is not possible to live off the wages they are making in this town, and if the university is expecting them to provide quality labor — and quality education as far as the TAs are concerned — then they need to be paid appropriately,” Cummings said.

For the full article, click on the link below.
[Source]: Santa Cruz Sentinel