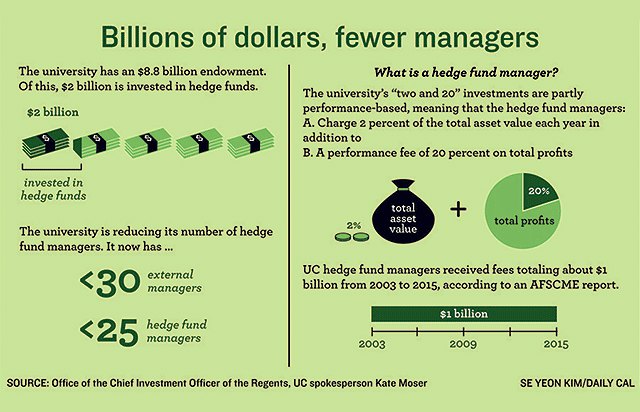 UC Chief Investment Officer Jagdeep Singh Bachher recently announced that the university will attempt to decrease its costs by further reducing its number of hedge fund managers, who manage about $2 billion of the university’s endowment of $8.8 billion in assets.

Controlling costs has been a priority of the UC Office of Investment for the past couple of years, according to UC spokesperson Kate Moser. This latest decision, announced at a Feb. 26 UC Regents Committee on Investments meeting, precedes a March 1 report by the labor union AFSCME Local 3299, which criticized the university’s hedge fund investments.

“If you can bring your costs down even farther than they already are, then that’s just more money coming back to the university to reinvest,” Moser said.

Moser said in an email that the university invests in both the bond market and the stock market to maximize its returns. This type of diversification is not unusual, according to Raymond Hawkins, a lecturer in the campus department of economics and a former hedge fund manager.

“Hedge funds play an important part in our investment mix because they reduce the overall volatility of the portfolio while also providing a source of returns,” Moser said in an email.