THIS timely dispatch from the Class War comes to us from a good (dissident) friend high up in the UCI Medical Center Administration, who also supports a single-payer healthcare system: 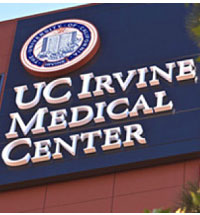 Five UC Medical Centers are on strike today and Wednesday after working months without a contract. The main issues are cutting workers hours and pay, run-away pay increases for upper management, and “safe staffing” issues regarding patient care.

The average UC employee annual salary is $50,000 a year, with a $25,000 annual pension compared to upper management’s six figure pension. UC president Mark Yudof‘s current annual salary is $600,000 — this fall he will retire after working only five years with a pension of $200,000 annually for life. This is 296 per cent more than the average UC worker. Oh, and he was also hired to teach law at UC Berkeley as soon as he retires from his position – his professor’s salary is yet to be determined. If that isn’t enough to get your attention — Yudof also draws pensions from the University of Minnesota and the University of Texas – all perfectly legal. Nice work if you can get it.

Two years ago, Terry Belmont, UCI Medical Center’s CEO since 2009, threatened to sue UC Regents to eliminate their current $375,000 pension cap. While Belmont was crying about his less than adequate entitlements, the Justice Department was investigating his hospital for submitting claims to Medicare and Medicaid for reimbursements inadequately performed by anesthesiology services. Belmont’s hospital was also fighting a whistle-blower suit from a former UCI professor and anesthesiologist, that claimed anesthesia was routinely administered by a UCI nurse or resident, when there was no anesthesiologist supervisor present, in fact, the supervisors weren’t even in the same building, and falsified records claiming they were there.

So what’s the big deal? Wall Street operates this way and always has. The difference is that these are public — not private institutions. These five UC Medical centers receive 300 million annually from tax payer monies. The money that taxpayers THINK is going to patient care is really lining the pockets of fat cats who do NOT take care of patients, while the actual workers are treated like peons.

What people like Belmont don’t understand is that patients are sent, in the mail, “patient satisfaction surveys,” and if they get enough bad ones returned, they lose money. But maybe executives like Belmont aren’t afraid of that happening. Did they sign a contract that stated they are entitled to their pension, no matter what? So who really suffers? The WORKERS suffer – and that directly affects patient care. An over-worked nurse, working a twelve-hour shift without an adequate break, makes mistakes. Period.

Todd Perez, Senior Emergency Medical Technician at UCLA Medical Center stated, “Being short-staffed means that sometimes, at the end of a 12-hour shift, there’s no one to relieve you.”

Back in 2008 when we entered The Great Recession, private businesses cut back to save money (IF they were still in business.) Not publicly-funded UC though – THEY decided to hire more executives. WHY did they need more executives and instead choose to cut back on those who actually direct patient care? Who knows. And frankly, it doesn’t matter to me what they were thinking. It needs to be changed.

In 2011 the UC decentralized its budget practices and turned each medical center into an independent profit center – in other words, there is no longer oversight to make sure there are checks and balances. Each medical center is now free to do what they choose with their money. So what ended up happening was a sharp increase of management positions with fat paychecks and even fatter pensions, and unprecedented borrowing to construct new buildings. Sure it’s important to keep up with technology and to maintain and when necessary replace worn out buildings, but at whose expense? 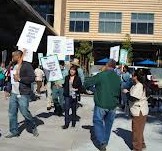 All the UC Medical Centers are fairly profitable, with UCI itself making $46 million and a 6.4% profit margin.   So they can’t claim there’s not enough money.  They don’t have a cash flow problem — they seem to have a priority problem.

Patient care workers suffer unnecessary stress and fatigue, and at times work without adequate training on the use of hazardous materials used to sterilize patient care areas. Some report being so rushed in their work that dirty patient care areas may not be properly sanitized before new patients arrive.

In February 2013, UCSF was fined  $200,000 by the California Dept. of Health for leaving foreign objects inside patients and not following proper procedures. Before that fiasco, they had just laid off 300 workers – bed-ridden patients got bed sores due to staff not having the time needed to properly “turn them,” and some patients had to get their own medications from the nurses’ station!

So what’s this “VIP treatment” at a public hospital? Union officials allege that UC donors, celebrities and friends and relatives of UC administrators received “VIP” treatment at the expense of other patients.

“They receive immediate attention, and they get everything they need,” Leonor Orozco, a UCI Medical Center custodian, stated in the report. “They tell us to come clean their rooms very quickly because they’re a VIP. They get preference on care. If they need something, everyone comes running.” 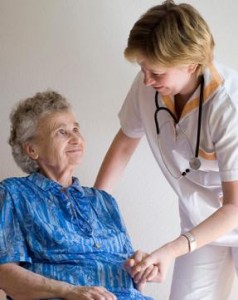 I think these CEOs should be required to do the jobs of every direct patient care worker for at least a week.  If they can’t do the job, then they should shadow an employee.

Don’t you want your loved one, or even yourself, to get the best possible healthcare when seriously ill?

Don’t you want the assurance that your care-giver is well rested and not worrying if he/she will be able to pay his/her bills next month?

Don’t you want your hard-earned tax money going to patient care and not some executives’ luxurious lifestyle?