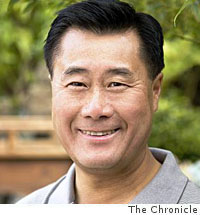 A state senator and an organization of journalists asked the University of California on Friday to explain why UC officials prevented a filmmaker from bringing his camera into a public regents meeting in San Francisco this week in apparent violation of the state’s open meeting law.

“State law is clear – any member of the public has a right to film and record public meetings of state bodies,” Sen. Leland Yee, D-San Francisco, wrote to UC President Mark Yudof.

Yee, who chairs the Senate’s committee on Public Records and Open Meeting Laws, asked Yudof to explain not only why filmmaker Ric Chavez was barred from taking his video camera into the meeting, but why UC policy – which makes no provision for the public’s right to film public meetings – “is in complete contradiction to state law.”

Liz Enochs, president of the Society of Professional Journalists’ Northern California chapter, addressed her letter to the regents, saying the group was “deeply concerned” that Chavez had been barred from the meeting.

She included a link to The Chronicle’s account, published Thursday, of UC officials preventing Chavez from entering the meeting with his camera on grounds that he lacked a press credential.

The Chronicle story also revealed an e-mail exchange in which UC questioned Chavez about the content and purpose of his film, and asked for his full name as a condition of access, also in apparent violation of the state’s Bagley-Keene Open Meeting Act.

UC did not immediately respond to the senator and journalists.

But Charles Robinson, UC’s vice president and general counsel, said in a statement that “the University of California strives to operate in as transparent and open a manner as possible.”

He said that Yudof and Regents Chairman Russell Gould have asked him to review and recommend any needed changes to the regents’ policy No. 1301, concerning rules for filming and recording meetings. Written in 1975, the policy pertains only to the press.

But Bagley-Keene, which ensures that anyone may film a public meeting, has been California law since 1967.

“It is our intention to ensure that going forward, this policy or any related policy or practice is fully compatible and consistent with California’s open meeting laws,” Robinson wrote in his statement.

The Chronicle also highlighted an incident outside the regents meeting Thursday in which UC police officers, who provide security during regents meetings, ordered Chavez to aim his camera away from them.

UC police have had to deal with raucous protesters this past year, but on Thursday, the meeting was calm and sparsely attended.

On Friday, Michael Risher, an attorney with the American Civil Liberties Union of Northern California, said police in a public setting may not prevent anyone from filming them.