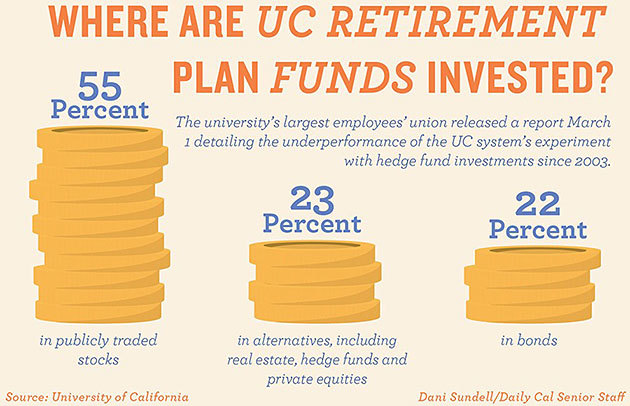 The University of California’s largest employees’ union released a report March 1 detailing what it calls an underperformance of the UC system’s “experiment” with hedge fund investments since 2003.

The American Federation of State, County and Municipal Employees press release stated that hedge fund investments, coming in part from the UC Retirement Plan and the General Endowment Pool, had lower-than-optimal return rates. Additionally, because the report found that hedge fund managers received fees totaling about $1 billion from 2003 to 2015, AFSCME is requesting more transparency and less costly investment alternatives.

According to an email from UC spokesperson Kate Moser, the report obtained data predating the tenures of both UC President Janet Napolitano and Chief Investment Officer Jagdeep Singh Bachher and doesn’t reflect the current emphasis the administration places on the transparency of external managers’ fees.

The AFSCME’s study also found that the university’s “two and 20” hedge fund investments failed to deliver on the promise of superior financial returns and were instead outperformed by the S&P stock market index by 52 percent. The investments are partly performance-based, meaning that the hedge fund managers charge 2 percent of the total asset value each year in addition to a performance fee of 20 percent on total profits.

According to UC Berkeley Haas School of Business assistant professor Brett Green, the two and 20 investments could have been a good investment practice in 2003, as it can give funds access to a wider variety of potentially lucrative opportunities — ones that are less liquid and therefore require more time and effort from the hedge fund managers.