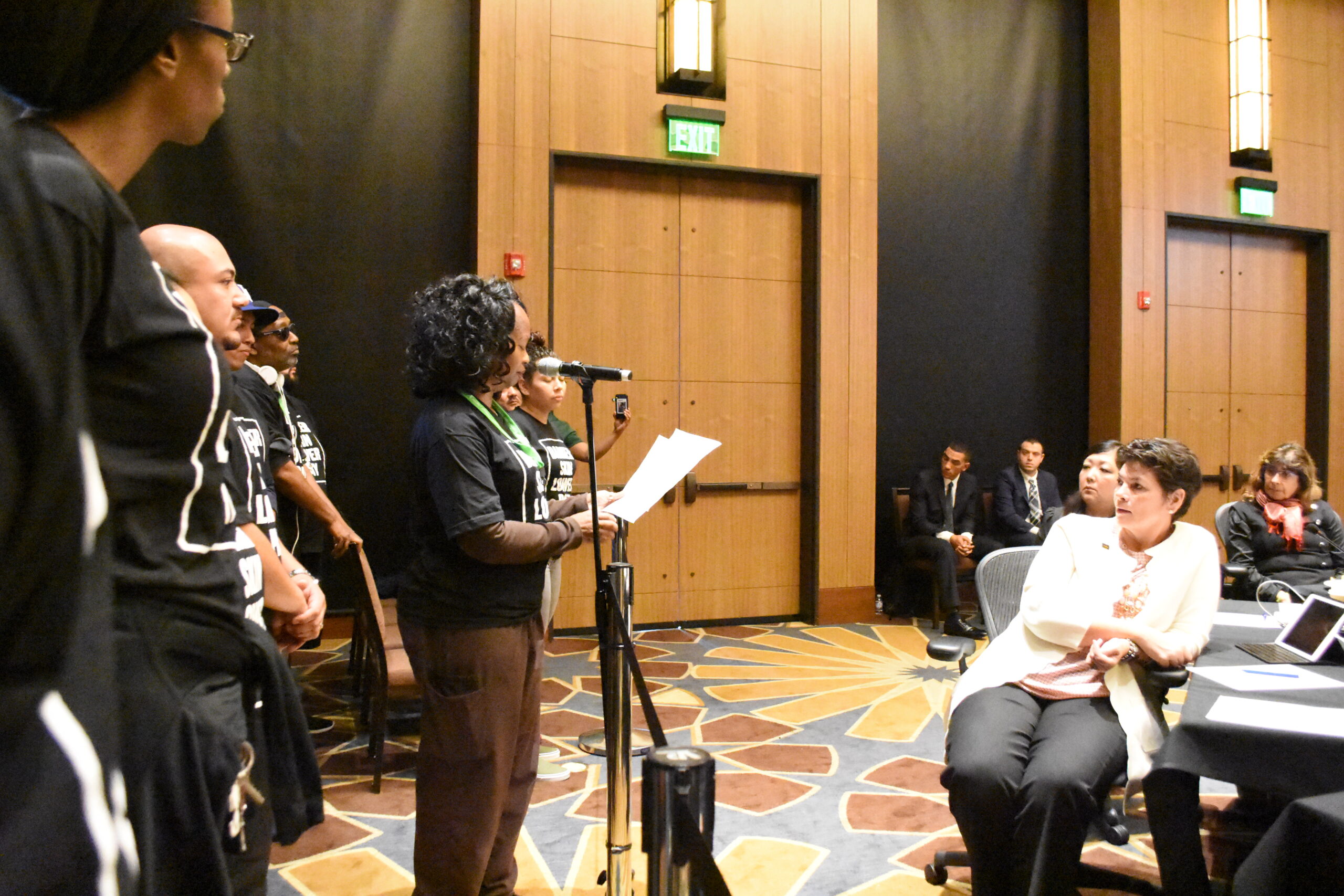 Rosalyn stood in front of a conference table full of UC Regents, President Janet Napolitano, and then-Lieutenant Governor Newsom. She wore her scrubs and a shirt that read: “Darker Skin, Lower Pay.” She spoke calmly but with a powerful voice to the table of Regents, and called them out: “outsourcing is pioneering a future of more inequality. We will not allow UC to normalize a reality where darker skin means lower pay.”

It was 2018 and early in our contract fight. We had also just published our report, Pioneering Inequality, in which we uncovered that UC’s Black workforce appeared to be vanishing and that women were being paid considerably less than men. That day, Rosalyn announced to the entire UC community that we would, once again, vote to go on strike.
“I never thought I’d go on strike,” she says. Rosalynn had only been working at UCLA for a year or so when we went on our first strike of the campaign. She explains that while she was scared and hesitated, “I felt comfortable and I felt supported, so I did it. The next round was still scary, but not as much as the first time. Then we did it again. The fear never left, but the power within me grew and that was larger than the fear.” It would take a bit, but eventually, Rosalyn came to see how important and beneficial striking had been. “I had a learning moment and had to come to terms that striking is the only way to get what you want in your contract. Some may think that the contract magically appears, but it doesn’t. You have to work hard for it.”
She goes on to say that by becoming a MAT she has learned a lot and understands the difference that a union makes. “I enjoy learning. I enjoy helping, so being involved was almost natural–but not without hesitation.” She laughs and says, “but it’s worth taking the dive to learn and educate ourselves. We can’t just work through problems by ourselves. If we do it in community, we can make a real difference and truly work through our issues.” Rosalynn says that she helps everyone whether or not they believe or participate, “I just want everyone to see and know just how much more powerful 3299 can be if we all join.”
Rosalyn Williams is an MRI Technician at UCLA. She is a proud 3299 member who hopes to retire from UCLA and continue to organize.
Share On