The AIDS epidemic was devastating the LBGTQ community as the government sat by. It was up to the people being affected to demand better. “That was around the time I came out,” said Kathryn Lybarger. “I realized the government didn’t care about me, and most people at the time thought queer folks were basically trash. I had to put my anger into something collective to help people not die.”

Kathryn and some coworkers started their own AIDS Coalition to Unleash Power (ACT UP) chapter near Springfield, Massachusetts. A focus of this ACT UP chapter was around the lack of attention to how HIV was hitting POC and women, and was a part of a national movement that forced the government to finally respond to the AIDS crisis. 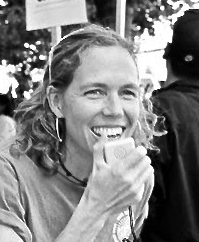 Soon after, Kathryn moved out west to study sculpture. She finished school and got a job as a gardener at SF State then UC Berkeley.

“After I got my first union job, I felt freedom. With job security, healthcare, and fixed raises, I could actually plan for the future. It helped me see that I could responsibly take care of more than just myself, and that having a family was a possibility.” And so she did.

Kathryn and her partner had a commitment ceremony and not long after had a son and then a daughter. They weren’t legally married yet, but soon Gavin Newsom, who at the time was the mayor of San Francisco, would declare same-sex marriage legal in San Francisco.

“I remember that day so clearly. We were all afraid the courts would strike down Newsom’s declaration so everyone was rushing to get married. We packed up all the baby stuff, our jackets, and raced to the city. In the pouring rain, folks had camped out all night to hold a place in line, wrapped around the block, to get married. Inside, dozens of deputized city workers worked frantically to get as many couples married as possible. The joy in the building was palpable. Hearing the words, ‘By the power vested in me by the state of CA…’ I realized this was the state recognizing my family, and it was overwhelming. So many rights bestowed.”

Days later, Newsom’s directive was overturned and same-sex marriages were invalidated. “But,” Kathryn says, “it started something, and in June of 2008 the CA Supreme Court ruled that we could get married. At the same time, Proposition 8, which banned same-sex marriage, made it to the ballot. Again, we headed to the courthouse to get married before Election Day, before Prop 8 might pass.”

Proposition 8 passed. “That feeling I had from the 80’s came boiling back, but it felt worse. I felt betrayed by my fellow Californians who had voted to take away my rights. But with kids now, I refused to go back. That night our communities took to the streets and started pushing back on Prop 8.” In 2015, the U.S. Supreme Court ruled same-sex marriage was legal in the land of the free, as it remains today.

“The fight for marriage equality was more than just for a marriage certificate. It was the rights that came with that piece of paper. During the AIDS pandemic, so many queer folks died and the surviving partner didn’t have any say. Having same-sex marriage be legal allowed our loving partners in that emergency room, allowed survivors to not be evicted from the home they had shared with their now-deceased partner, allowed kids to stay with their surviving parent.”

“That’s why it’s really scary with this new Supreme Court that is undoing a lot of rights we’ve won and trying to stop all the progress we still have to make, like for trans rights. But what I do know is that we all have someone to protect from hate, whether it is our kid, our neighbor, our coworker, or ourselves. We have a shared interest in fighting back together, and when we do, we win. Just like in a union.”

Kathryn Lybarger serves as AFSCME Local 3299’s and AFL-CIO Union President. She is a Lead Gardener at UC Berkeley by trade and a wife and mother of two.