One of the most impactful forces behind our union is our Executive Vice President Michael Avant.

Michael was born in East St. Louis, Illinois and at the age of thirteen moved to San Diego, California. Flash forward a few years, he found himself working for UC San Diego as a Patient Transporter. It didn’t take long for his leadership skills and grit to fight for “what’s right” to become apparent to all those around him. 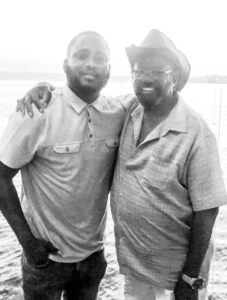 But where did Michael’s grit to fight for what is right come from? From his father, Michael Avant Sr.  Michael grew up watching his dad fight for what is right. He was a Greyhound Bus Driver that went on strike for five years. Michael not only saw but felt the sacrifices that one has to make in order to win big.

Being a black man added another layer of perseverance and grit. He has personally experience first hand police brutality and discrimination. His father was racially profiled and pulled over by a cop in East St. Louis. And like most of the videos you’ve seen, things escalated quickly and his dad found himself on the ground with a broken jaw. The family filed a lawsuit but ultimately it was swept under the rug.

“I’m not just a UC worker fighting for a fair wage, a retirement, with dignity and benefits. I’m also a black man pushing back on racism in my community and at UC. Justice isn’t exclusive to economic justice. It needs to go further out than that.”

Michael is an active member of the San Diego labor community and the Chair in 3299’s Racial Justice Committee that is currently spearheading efforts against UC’s policing agenda that fails to protect Black and Brown UC workers and students.

“We are a union that stands up for justice everywhere.”