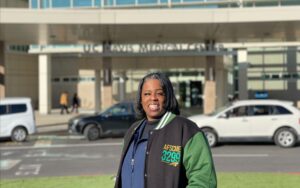 When you first see Natisha one of the first things you notice is her smile and the joy she exudes, it’s contagious. She says one of the things that fuels her is her love in serving others, especially her union siblings, and of course, fighting UC.

It’s been one year since she became a MAT leader and she feels empowered and is honored to be part of a union that will “fight ‘til the wheels fall off.” The unfairness generated by UC, while infuriating, does not faze Natisha. She has organized actions on behalf of individual colleagues and entire departments. She has spearheaded several marches on the boss. The most recent one resulted in a meeting with labor relations. When a colleague with a medical condition was injured on the job, it was Natisha who ensured management followed health and safety protocols–generating a report on the spot and providing the member with urgent care. And, when reports of late night burglaries against staff surfaced, Natisha led efforts to arrange a shuttle service to pick up workers at the hospital entrance.

She is known among her coworkers for her fearlessness in pointing out what is right and what is wrong. Any hesitancy she had about becoming a MAT Leader disappeared after she had enough of “seeing how supervisors and management were treating us and getting away with it because employees were afraid to speak up.” She observes how “management only cares about getting patients in the room because that is where the money is,” which can lead to the hospital not getting cleaned properly. The pressure of being understaffed, overworked, and underpaid is taking a toll on the Environmental Services department at the medical center. “We are the ones who make the hospital run by cleaning it and keeping it a safe environment, but it is hard to do when you are shortstaffed and overworked,” Natisha explains. Meanwhile, she reminds us, “the bigwigs are getting their bonuses. They are getting their vacations. It’s not fair. It’s not fair.”

It’s safe to say that with members like Natisha, how can we not win when we fight? Or as she sums up, “I feel that I am a voice to be reckoned with.”

Natisha Booker has been a Senior Custodian with the Environmental Services department at the UC Davis Medical Center for the past five years. She lives in Sacramento with her husband and three children.