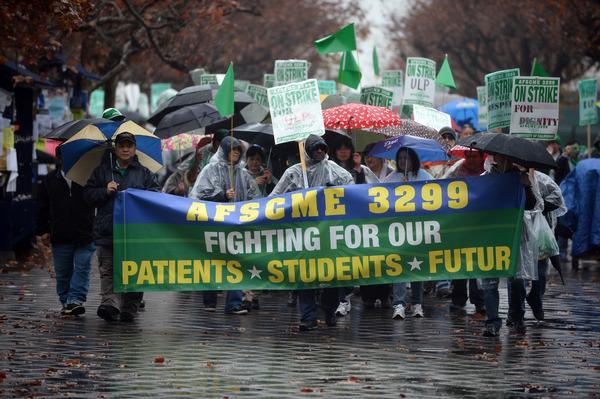 A food service worker at UCLA says his employer pays him under two names to avoid overtime pay.

In 2015, UC President Janet Napolitano announced with great fanfare that the University of California would become the first public university in the country to voluntarily set a $15 minimum wage.

But two years later, a review of audits and pay documents by this news organization indicates that the system is doing a poor job of monitoring compliance with Napolitano’s feel-good edict — and that at least some workers continue to make far less.

UC’s largest employee union, AFSCME’s Local 3299, says the purported wage bump is nothing more than a hollow attempt to drum up good publicity.

“It all appears to have been a smoke screen,” said Todd Stenhouse, a union spokesman.

To make the point, the union provided this news organization with two sets of pay stubs for a single contract food service worker at UCLA who logged a combined 106 hours over two weeks at $10.50 an hour. Not only was the hourly rate well below UC’s $15 minimum, the union alleges the company issued the same worker checks in two names to avoid paying him overtime.

The union shared the pay stubs under the condition the name of the worker and the company that employs him not be revealed because the worker is fearful he will be fired.

“I believe it’s unjust,” the worker said. “We’re doing the same work as the rest of the workers there and they’re paying us less.”

Claire Doan, a spokeswoman for UC, said in an email that the worker might be employed by a company that has a contract with UC that predates the policy change, meaning the company can still legally pay less than $15 an hour.

UCLA did not respond to a request for comment. In a separate incident, the campus also recently ended a contract with a company that employed valet workers at the school’s hospital and in turn, the workers claim, hired part-time student workers who were exempt from UC’s new wage policy.

The pay dispute comes as some campuses are shelling out big money to ousted administrators. UC Berkeley, for instance, is paying ex-chancellor Nicholas Dirks, who resigned after mishandling sexual harassment cases and the school’s budget, $434,000 to take a yearlong paid sabbatical.

“It’s a scandal by itself,” Stenhouse said, “but it’s a horrifying scandal next to Dirks getting paid huge sums of money for not working.”

For the full article, click on the link below.
[Source]: The Mercury News