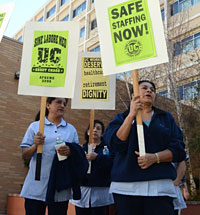 Across California, from San Diego to Los Angeles to Berkeley, service and medical workers took up signs and megaphones to protest a contract put forth by the University of California that would require the workers to pay more into the UC Retirement Plan.

The American Federation of State, County, and Municipality Employees Local 3299 Union, which represents UC employees, is also asking for fairer compensation and more staff, both of which they argue would allow service workers to provide faster and higher-quality work.

The UC may point to the system’s current financial instability, the result of record budget cuts and state disinvestment over the last decade, as a sensible reason to change the workers’ contracts.

However, money exists within the system now that could provide these workers with many of the benefits they deserve.

Specifically, a 2011 report issued by the UC Office of the President details executive payout and salary across the system.

In numerous cases, UCLA administrators already making hundreds of thousands of dollars made tens of thousands more in bonuses, stipends, cash compensations and other handouts.

This isn’t to say that these administrators don’t deserve their paychecks.

They are no doubt highly qualified and educated people who work to advance the UC’s best interests.

However, with the 2010-2011 median household income in California hovering around $54,000, and with many administrators making four times that figure, it is not hard to see the necessity of allocating new bonuses to administrators while many workers have to work overtime to earn just more than $30,000 in annual salary.

Proponents of the current system argue that it would be in the University’s best interest to continue handing out high salaries, bonuses and other additional compensation in order to attract competitive talent to the UC.

But state schools are not meant to operate like high-end investment banks and law firms, fighting with each other tooth-and-nail to attract top-tier bureaucratic talent.

Contract negotiations with the worker’s union provide the UC with an opportunity to reverse this trend and take a stand against inflationary tendencies in higher education.

With the UC’s wide recognition, the institution holds a currency that can be more valuable than any paper kind: reputation.

The fear of losing talented administrators should not be an overarching one for the UC, a system able to stake its reputation on world-class research, technological innovation and top-flight academics that will continue to attract bright minds even without beefed-up bonus checks.

Given this strong position of visibility and credibility, UC administrators should consider forgoing bonus payments in favor of improving quality of life for service and medical workers.

The image of a forward-thinking and progressive Californian university system quickly falls apart, considering that one portion of the University population is being nickel and dimed while another portion reaps the benefits.

While representatives of the UC point to the fact that 14 other unions have already agreed to the pension reform, and that every one of the 180,000 employees pays into the pot hoping to receive benefits, this isn’t as utilitarian as it sounds.

Even if everyone pays the same rate, the playing field is inherently uneven. Paying 6.5 to 7 percent of your paycheck hurts a lot less if you’re making $200,000 or more a year with a bonus than if you’re earning only $30,000 a year, even with overtime pay.

Bonuses and incentives accounted for $9.3 million in spending in 2011, a small amount compared to the $24 billion the University claims it needs to raise for its pension.

However, this reform holds both practical and symbolic value, and could be the first step in transforming the way in which all workers, not just administrators, are treated.

It’s time for the University to put its money where its mouth is and give workers what they deserve.

By taking massive bonuses out of the equation and using that money either to increase pay or to better pensions for its workers, the UC can help set a new standard of compensation for service personnel and help reverse the harmful cycle of increasing administrative compensation our higher education system has fallen into.

As students, we have the ability to influence how our University functions. If we collectively stand with our service and medical workers – whether it be through demonstrations, mass emails or petitions – we have the opportunity to help begin a new trend in education.